Are Roundabouts the Key to Making the Roads Safer? 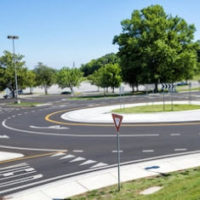 Cities are always trying to figure out how they can reduce the number of car accidents within their borders. Passing new laws or making them more restrictive can help in certain situations–for example, DUI laws or those restricting the use of cellphones while driving. But the bigger issue is how to design traffic flow in a way that results in fewer accidents of any kind.

The Use of Roundabouts

One idea that has been used sporadically but which shows promise is the use of roundabouts (which don’t have to be perfectly round–they can be oval or tear shaped). Unlike intersections that use stop signs or street lights, roundabouts are circular shaped patterns, where traffic is directed around the circle and yields to cars coming into the circle.

There still seems to be a public perception that roundabouts, being ungoverned by traffic signals, are more, and not less dangerous. In fact, most of the research proves otherwise.

Accidents are Reduced at Roundabouts

According to the Insurance Institute for Highway Safety, the use of roundabouts resulted in a 75% decrease in injury accidents as compared to intersections with traditional controls. Collisions involving fatalities went down 90%.

The U.S. Department of Transportation also favors the use of roundabouts, saying that the number of collisions where someone is seriously injured is reduced between 78-82% as compared to traditional intersections. A 1992 study in the Netherlands similarly found a 51% reduction in overall crashes where there were roundabouts.

Why Roundabouts are Safer

There are many reasons why roundabouts work. One reason is that unlike traditional intersections where cars often approach at high speeds, cars navigating a roundabout must necessarily slow down. This makes a huge difference in injuries to pedestrians. At 20mph, 9 out of 10 pedestrians will survive an impact. But at 30mph the survival rate goes down to 5 out of 10.

There are also fewer conflict points–places where accidents can potentially happen–than there are in normal intersections. Modern roundabouts also have fewer lane changes, a cause of many traffic accidents.

When collisions do happen, they are often between cars going the same direction. There are almost no head-on or side impact crashes, which tend to do the most damage. Pedestrians also need only to watch for cars coming in one direction.

Although some critics cite to statistics showing there may be more accidents in roundabouts, those are usually non-injury causing accidents, or accidents involving one vehicle (i.e., running off the road). Many of these accidents may be caused by the general unfamiliarity of drivers as to how to navigate roundabouts.

For those worried about convenience, roundabouts still win; the FDOT estimates that intersections see up to a 50% increase in capacity with roundabouts.

Get help if you have been involved in a car accident. Tampa injury law attorneys at The Pawlowski//Mastrilli Law Group can provide you help in obtaining damages for injuries sustained in any type of car accident.

By The Pawlowski//Mastrilli Law Group | Posted on February 27, 2019
« Can Parties Agree to Waive Child Support?
Can You Be Awarded Assets in a Divorce Before the Case is Finalized? »