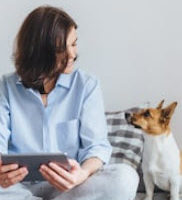 For many people, pets are family. Spouses may have selected a pet from infancy and raised the animal as if it were a human child, with all the love care and affection that goes into raising a child. When spouses divorce, there may be talk about who gets “custody” of the family dog or cat, because to the couple, the animal is as much a creature with a soul and feelings as a human is.

The problem with this is that the law does not recognize animals as people, in divorce law or in any other kind of law. There is no test as to what the best interest of the animal is, or any evaluation as to which parent can provide the healthiest and safest environment for an animal, the way such questions would be asked of a human child.

In fact, because pets are just property in the eyes of a law, it is even possible for judges to order animals sold in a divorce, and have the profits divided amongst the spouses, if the animal has value and the parties can’t agree on who keeps the animal. However, there is no law expressly prohibiting judges from considering the interests of a pet when determining who will keep the animal, although most courts have not done this, recognizing animals’ legal status as simply property.

The state of California has recently enacted a law believed to be one of the first in the country aimed to change that. The law recognizes that at least when it comes to divorce, animals are people too. Alaska and Illinois already have similar laws.

The California law allows judges to consider which “parent” can best provide for the care of the animal, and lets courts fashion shared custody arrangements for pets, determining who will feed and pay for veterinary bills for the animals. The law does not require that judges make these considerations—it just allows those judges who want to do so to make these determinations legally.

Opponents of the measure express concern that raising pets to the level of humans creates a legal slippery slope. They worry about being imprisoned for “murdering” insects or being charged with neglect or abandonment for dropping an animal off at the animal shelter.

In personal injury suits, many have concern that if an animal is recognized as a person, there could be lawsuits brought by the owners of the animals for the animals’ pain and suffering when injured in an accident.

Extra Litigation is a Concern

Some family law attorneys don’t favor the law, citing concern that it can lead to even more cost and expense in already contested and expensive family law litigation. They even envision experts in animal care being called to testify as to the best placement of an animal in a family law case.

Questions about a divorce or custody problem? Our Tampa family law attorneys at The Pawlowski//Mastrilli Law Group can help you handle these problems and let you know what to expect in your divorce case.